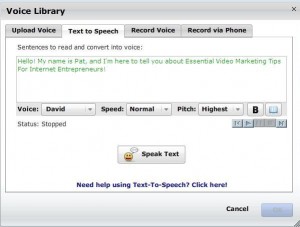 The new features to the VoiceOver engine one would immediately recognize are the options to adjust the Speed and the Pitch of the built-in voices. To increase the rate at which the voice-over reads the text, simply select an appropriate value from the dropdown list.

Also, clicking the B icon on the VoiceOver window increases the emphasis of the voice-over on the particular text. Use it when you want to put across important text in your video. One instance where you might want to use the emphasis feature is on the closing slides where you put across key points or the summary of the entire video 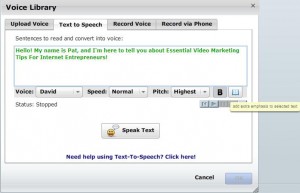 Build your own pronunciation vocabulary

Most often we've come across instances when the voiceover does not pronounce the word correctly. This happens on complicated words such as medical, scientific or engineering terms, names of people or persons and acronyms (such as FSMO which is actually pronounced as fizzmo). With the new feature, you could build a library of pronunciations which AVR replaces everytime it encounters the term on any of your flash video. This option could be launched by clicking the book-like icon on the Voice Library window.

Another new feature is the option to record your voice-over through phone. One might wonder why would we need this since there already is an option that to record the voice via the microphone option. 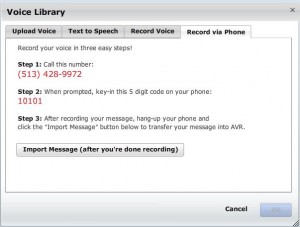 The Record over phone could actually prove handy in instances where you have someone else lending the voice for your video. You could ask the other person to dail into (513) 428 9972, enter the 5-digit passcode and then start recording their voice. Upon hang up, you would simply have to click the Import Message. The voice recording would be instantly added to the paragraph for which the recording window was open.

“My cousin recommended this blog and she was totally right keep up the fantastic work!”

“This is an amazing tool! I really can't wait to get started with it and see how it improves my online campaigns.

“Thanks for this great website. I am trying to read some more posts but I cant get your website to display properly in my Opera Browser. Thanks again.”

“Video Marketing is a great way to promote hardware tools and products online.';~”